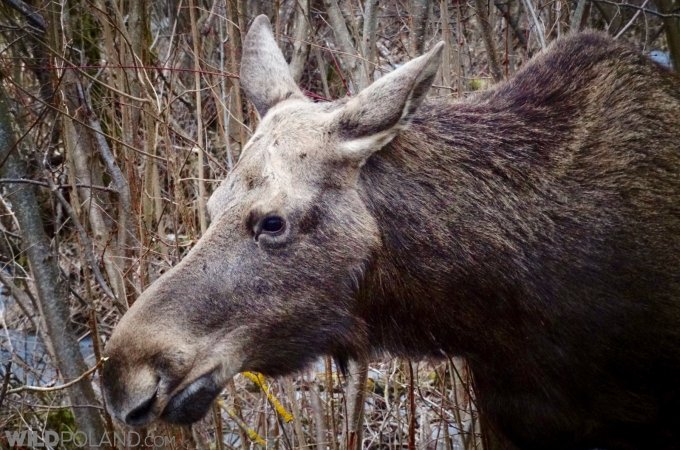 Our first spring tour this season has started in rather wintry conditions. Severe frost that lasted for over a week at the beginning of March has since declined and few sunny days brought a little hope for spring, but after just few milder days the winter came back bringing cold winds and temperatures well below zero. Such challenging weather conditions lasted through the entire tour and made some of our observations a little more difficult, although we were still able to spot a lot interesting species of birds and mammals, to come across remnants of wolf prey, and to see flocks of birds on a spring migration (heartwarming sight!).

While in the Bialowieża Forest, we saw four different groups of Bison (14 animals in total), some of them at quite a close distance, thus giving us great, exciting moments. In search of them we explored many different sites, mostly meadows around Bialowieża village, as well as the whereabouts of Narewka village in the northernmost part of the Forest.

We visited some of the most interesting trails and places around Białowieża, including Wysokie Bagno Reserve preserving an extensive area of natural spruce forest on a raised bog (we observed a Great Spotted Woodpeckers there), and the Żebra Żubra trail – a wooden path running through a very picturesque alderwood and parts of wet spruce forest, where we heard mating calls of Cranes. We explored meadows along the Narewka river, where a pair of Goldeneye, White Stork and Lapwings were seen. Over the vast open meadows we heard calls of Yellowhammers and Woodlarks. The Tsar’s Trail has shown us Three-toed Woodpecker, Treecreeper, Crested, Coal and Long-tailed Tit, while one of our walks at dusk succeeded with a fabulous observation of a male Pygmy Owl.

The highlight, however, was a visit to the Strict Protection Area of the National Park, listed UNESCO World Heritage Site, where we spent almost eight hours walking the trail leading right into the core area of the Reserve. Seeing the diversity of habitats in the last natural European forest and walking between centuries old trees was an extraordinary experience. Our NP guide told us a lot of absorbing facts about unique biodiversity of the Forest, the huge role of deadwood in the ecosystem, as well as a history of the park and surrounding area. While there, we saw such interesting bird species as White-backed, Lesser Spotted, Middle Spotted and Black Woodpecker, and noticed high activity of Nuthatch, Treecreeper and several Tits. Just outside the Strictly Protected part we observed a pair of White-tailed Eagles chasing Bean Geese (a very spectacular sight!).

At the Biebrza Marshes we explored an extensive backwaters of Biebrza and Narew Rivers. Despite cold and wintry conditions and still wide surfaces of ice, we observed large concentrations of waterfowl – Geese, Whooper Swan, and Ducks (Wigeon, Northern Pintail, Mallard and Shoveler). Our bird list was completed with fabulous sights of numerous White-tailed Eagles, and some great mixture of species such as Smew, single male of Black Grouse, Cranes, Meadow Pipit and Reed Bunting.

Our daily drives and walks around the Southern and the Middle Basins of Biebrza Marshes resulted with fantastic sightings of native mammals: Elk (9 animals in total in five different places), as well as Beavers and Otters feeding at the banks of the rivers. What is more, on one of the numerous channels we came across a Muskat, a very interesting observation, especially that the population of this introduced specimen has fallen drastically in a recent decade.

One of the highlights of our tour was a massive concentration of geese nearby the Ruś village (ca. 4 thousands of birds), which we observed on our last day, just before sunset. The view over the vast peaceful river valley, and the air filled with sounds and calls of thousands of birds were just amazing. This incredible spectacle was very symbolic and made a great finish to our visit at the Marshes.

Back at Warsaw, we had a very pleasant walk at the Old Town followed by a tasty lunch in a cosy restaurant – a very nice accent before saying goodbye.

We can’t resist sharing comments added by Tour Participants, so here is one 😉